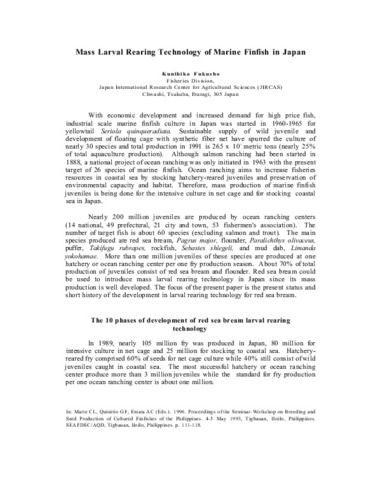 With economic development and increased demand for high price fish, industrial scale marine finfish culture in Japan was started in 1960-1965 for yellowtail Seriola quinqueradiata. Sustainable supply of wild juvenile and development of floating cage with synthetic fiber net have spurred the culture of nearly 30 species and total production in 1991 is 265 x 103 metric tons (nearly 25% of total aquaculture production). Although salmon ranching had been started in 1888, a national project of ocean ranching was only initiated in 1963 with the present target of 26 species of marine finfish. Ocean ranching aims to increase fisheries resources in coastal sea by stocking hatchery-reared juveniles and preservation of environmental capacity and habitat. Therefore, mass production of marine finfish juveniles is being done for the intensive culture in net cage and for stocking coastal sea in Japan. Nearly 200 million juveniles are produced by ocean ranching centers (14 national, 49 prefectural, 21 city and town, 53 fishermen's association). The number of target fish is about 60 species (excluding salmon and trout). The main species produced are red sea bream, Pagrus major, flounder, Paralichthys olivaceus, puffer, Takifugu rubrapes, rockfish, Sebastes shlegeli, and mud dab, Limanda yokohamae. More than one million juveniles of these species are produced at one hatchery or ocean ranching center per one fry production season. About 70% of total production of juveniles consist of red sea bream and flounder. Red sea bream could be used to introduce mass larval rearing technology in Japan since its mass production is well developed. The focus of the present paper is the present status and short history of the development in larval rearing technology for red sea bream.