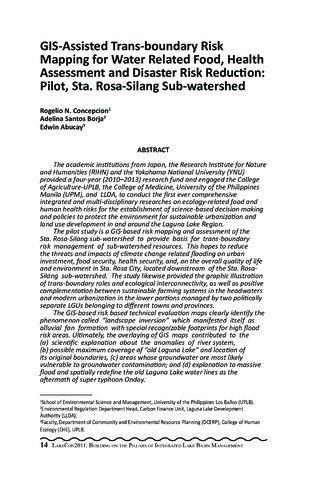 The academic institutions from Japan, the Research Institute for Nature and Humanities (RIHN) and the Yokohama National University (YNU) provided a four-year (2010-2013) research fund and engaged the College of Agriculture-UPLB, the College of Medicine, University of the Philippines Manila (UPM), and LLDA, to conduct the first ever comprehensive integrated and multi-disciplinary researches on ecology-related food and human health risks for the establishment of science-based decision making and policies to protect the environment for sustainable urbanization and land use development in and around the Laguna Lake Region. The pilot study is a GIS-based risk mapping and assessment of the Sta. Rosa-Silang sub-watershed to provide basis for trans-boundary risk management of sub-watershed resources. This hopes to reduce the threats and impacts of climate change related flooding on urban investment, food security, health security, and, on the overall quality of life and environment in Sta. Rosa City, located downstream of the Sta. Rosa-Silang sub-watershed. The study likewise provided the graphic illustration of trans-boundary roles and ecological interconnectivity, as well as positive complementation between sustainable farming systems in the headwaters and modern urbanization in the lower portions managed by two politically separate LGUs belonging to different towns and provinces. The GIS-based risk based technical evaluation maps clearly identify the phenomenon called landscape inversion which manifested itself as alluvial fan formation with special recognizable footprints for high flood risk areas. Ultimately, the overlaying of GIS maps contributed to the (a) scientific explanation about the anomalies of river system, (b) possible maximum coverage of old Laguna Lake and location of its original boundaries, (c) areas whose groundwater are most likely vulnerable to groundwater contamination; and (d) explanation to massive flood and spatially redefine the old Laguna Lake water lines as the aftermath of super typhoon Ondoy.