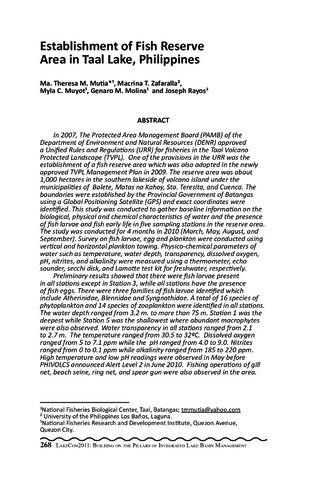 In 2007, The Protected Area Management Board (PAMB) of the Department of Environment and Natural Resources (DENR) approved a Unified Rules and Regulations (URR) for fisheries in the Taal Volcano Protected Landscape (TVPL). One of the provisions in the URR was the establishment of a fish reserve area which was also adopted in the newly approved TVPL Management Plan in 2009. The reserve area was about 1,000 hectares in the southern lakeside of volcano island under the municipalities of Balete, Matas na Kahoy, Sta. Teresita, and Cuenca. The boundaries were established by the Provincial Government of Batangas using a Global Positioning Satellite (GPS) and exact coordinates were identified. This study was conducted to gather baseline information on the biological, physical and chemical characteristics of water and the presence of fish larvae and fish early life in five sampling stations in the reserve area. The study was conducted for 4 months in 2010 (March, May, August, and September). Survey on fish larvae, egg and plankton were conducted using vertical and horizontal plankton towing. Physico-chemical parameters of water such as temperature, water depth, transparency, dissolved oxygen, pH, nitrites, and alkalinity were measured using a thermometer, echo sounder, secchi disk, and Lamotte test kit for freshwater, respectively. Preliminary results showed that there were fish larvae present in all stations except in Station 3, while all stations have the presence of fish eggs. There were three families of fish larvae identified which include Atherinidae, Blennidae and Syngnathidae. A total of 16 species of phytoplankton and 14 species of zooplankton were identified in all stations. The water depth ranged from 3.2 m. to more than 75 m. Station 1 was the deepest while Station 5 was the shallowest where abundant macrophytes were also observed. Water transparency in all stations ranged from 2.1 to 2.7 m. The temperature ranged from 30.5 to 32°C. Dissolved oxygen ranged from 5 to 7.1 ppm while the pH ranged from 4.0 to 9.0. Nitrites ranged from 0 to 0.1 ppm while alkalinity ranged from 185 to 220 ppm. High temperature and low pH readings were observed in May before PHIVOLCS announced Alert Level 2 in June 2010. Fishing operations of gill net, beach seine, ring net, and spear gun were also observed in the area.