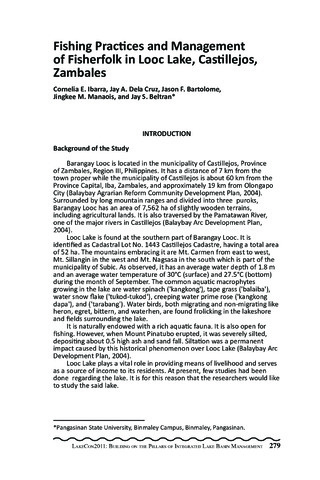 Barangay Looc is located in the municipality of Castillejos, Province of Zambales, Region III, Philippines. It has a distance of 7 km from the town proper while the municipality of Castillejos is about 60 km from the Province Capital, Iba, Zambales, and approximately 19 km from Olongapo City (Balaybay Agrarian Reform Community Development Plan, 2004). Surrounded by long mountain ranges and divided into three puroks, Barangay Looc has an area of 7,562 ha of slightly wooden terrains, including agricultural lands. It is also traversed by the Pamatawan River, one of the major rivers in Castillejos (Balaybay Arc Development Plan, 2004). Looc Lake is found at the southern part of Barangay Looc. It is identified as Cadastral Lot No. 1443 Castillejos Cadastre, having a total area of 52 ha. The mountains embracing it are Mt. Carmen from east to west, Mt. Sillangin in the west and Mt. Nagsasa in the south which is part of the municipality of Subic. As observed, it has an average water depth of 1.8 m and an average water temperature of 30°C (surface) and 27.5°C (bottom) during the month of September. The common aquatic macrophytes growing in the lake are water spinach ('kangkong'), tape grass ('balaiba'), water snow flake ('tukod-tukod'), creeping water prime rose ('kangkong dapa'), and ('tarabang'). Water birds, both migrating and non-migrating like heron, egret, bittern, and waterhen, are found frolicking in the lakeshore and fields surrounding the lake. It is naturally endowed with a rich aquatic fauna. It is also open for fishing. However, when Mount Pinatubo erupted, it was severely silted, depositing about 0.5 high ash and sand fall. Siltation was a permanent impact caused by this historical phenomenon over Looc Lake (Balaybay Arc Development Plan, 2004). Looc Lake plays a vital role in providing means of livelihood and serves as a source of income to its residents. At present, few studies had been done regarding the lake. It is for this reason that the researchers would like to study the said lake.