Phylogeography of the freshwater sardine (Sardinella tawilis) in Taal Lake, Batangas and its implications for a sustainable management strategy 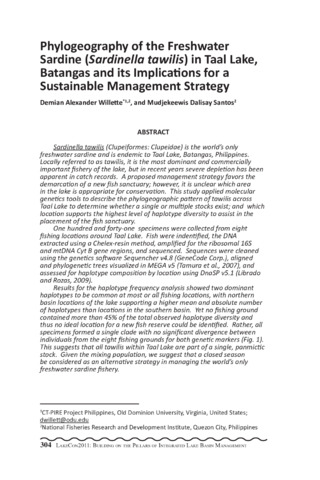 Sardinella tawilis (Clupeiformes: Clupeidae) is the world s only freshwater sardine and is endemic to Taal Lake, Batangas, Philippines. Locally referred to as tawilis, it is the most dominant and commercially important fishery of the lake, but in recent years severe depletion has been apparent in catch records. A proposed management strategy favors the demarcation of a new fish sanctuary; however, it is unclear which area in the lake is appropriate for conservation. This study applied molecular genetics tools to describe the phylogeographic pattern of tawilis across Taal Lake to determine whether a single or multiple stocks exist; and which location supports the highest level of haplotype diversity to assist in the placement of the fish sanctuary. One hundred and forty-one specimens were collected from eight fishing locations around Taal Lake. Fish were indentified, the DNA extracted using a Chelex-resin method, amplified for the ribosomal 16S and mtDNA Cyt B gene regions, and sequenced. Sequences were cleaned using the genetics software Sequencher v4.8 (GeneCode Corp.), aligned and phylogenetic trees visualized in MEGA v5 (Tamura et al., 2007), and assessed for haplotype composition by location using DnaSP v5.1 (Librado and Rozas, 2009). Results for the haplotype frequency analysis showed two dominant haplotypes to be common at most or all fishing locations, with northern basin locations of the lake supporting a higher mean and absolute number of haplotypes than locations in the southern basin. Yet no fishing ground contained more than 45% of the total observed haplotype diversity and thus no ideal location for a new fish reserve could be identified. Rather, all specimens formed a single clade with no significant divergence between individuals from the eight fishing grounds for both genetic markers (Fig. 1). This suggests that all tawilis within Taal Lake are part of a single, panmictic stock. Given the mixing population, we suggest that a closed season be considered as an alternative strategy in managing the world s only freshwater sardine fishery.