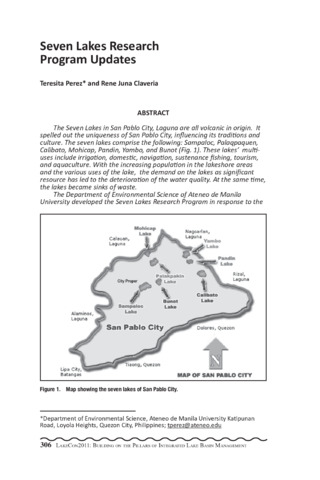 The Seven Lakes in San Pablo City, Laguna are all volcanic in origin. It spelled out the uniqueness of San Pablo City, influencing its traditions and culture. The seven lakes comprise the following: Sampaloc, Palaqpaquen, Calibato, Mohicap, Pandin, Yambo, and Bunot (Fig. 1). These lakes multiuses include irrigation, domestic, navigation, sustenance fishing, tourism, and aquaculture. With the increasing population in the lakeshore areas and the various uses of the lake, the demand on the lakes as significant resource has led to the deterioration of the water quality. At the same time, the lakes became sinks of waste. The Department of Environmental Science of Ateneo de Manila University developed the Seven Lakes Research Program in response to the urgent need to maintain the sustainability of the lakes uses. It has been coordinating with the local government units and the fisherfolk community and the FARMC for the past five years. The following are the expected outputs of the Department of Environmental Science for the Seven Lakes: 1. Determining Macrophyte Primary Production and Nutrient Availability in Lake Palacpaquen, San Pablo City, Laguna 2. An assessment of the Coliform Contamination in Sampaloc, Calibato and Mohicap Lake Waters and Selected Springs 3. A Comparative Study of the Effectiveness of Commercial and Farmmade feeds on the Growth of Tilapia 4. Nutrient Dispersion Patterns in Drainage and Lake Sediments: A Study of Sourcing for Selected Lakes in San Pablo City, Laguna 5. The Physico-Chemical Characterization of Sediments in Palacpaquen Lake and Adjoining River Systems, San Pablo City, Laguna 6. Assessing the Effects of Anthropogenic Activities to the Hydrology of San Pablo City, Laguna 7. A Geo-physical and Geo-chemical Assessment of Soils Surrounding Selected Lakes in San Pablo City, Laguna 8. Isolation and Characterization of Denitrifying and Phenoldegrading Microorganisms from Sampaloc Morphometry and Sedimentation of Palacpaquen Lake, San Pablo City, Laguna 9. An Assessment of the Phytoplankton and Macrobenthic Organisms as Biological Indicators in Calibato, Mohicap and Sampaloc Lakes 10. An Assessment of the Benthic Community Structure: Implications on the Water Quality of Lake Palacpaquen, San Pablo City, Philippines 11. A Study of the History of Fishery Utilization of Tilapia in Lake Palacpaquen, San Pablo City, Philippines There is also an existing collaboration with the Department of Electrical and Computer Engineering (ECE) of Ateneo de Manila University where using solar powered water pH, temperature and dissolved oxygen meters immersed in the Lake Palacpaquen are monitored and transmitted to the main server. The Department of Environmental Science is in the process of identifying gaps on the researches done in the Seven Lakes and assessing the future directions.