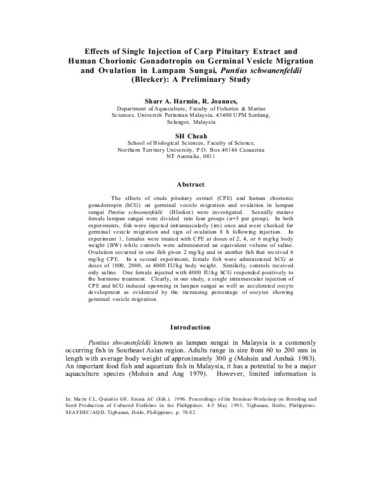 The effects of crude pituitary extract (CPE) and human chorionic gonadotropin (hCG) on germinal vesicle migration and ovulation in lampan sungai Puntius schwanenfeldii (Bleeker) were investigated. Sexually mature female lampan sungai were divided into four groups (n=3 per group). In both experiments, fish were injected intramuscularly (im) once and were checked for germinal vesicle migration and sign of ovulation 8 h following injection. In experiment 1, females were treated with CPE at doses of 2, 4, or 6 mg/kg body weight (BW) while controls were administered an equivalent volume of saline. Ovulation occurred in one fish given 2 mg/kg and in another fish that received 6 mg/kg CPE. In a second experiment, female fish were administered hCG at doses of 1000, 2000, or 4000 IU/kg body weight. Similarly, controls received only saline. One female injected with 4000 IU/kg hCG responded positively to the hormone treatment. Clearly, in our study, a single intramuscular injection of CPE and hCG induced spawning in lampan sungai as well as accelerated oocyte development as evidenced by the increasing percentage of oocytes showing germinal vesicle migration.