In-vitro evaluation of some commercial probiotics used in the grow-out culture of the tiger shrimp Penaeus monodon: Effect on bacterial parameters 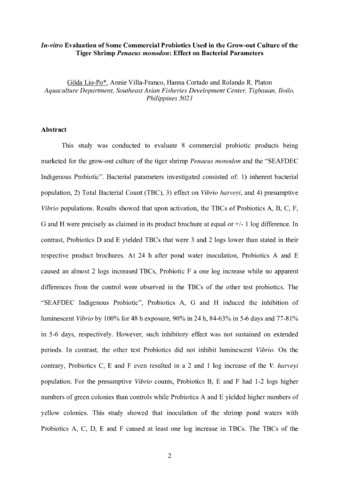 This study was conducted to evaluate 8 commercial probiotic products being marketed for the grow-out culture of the tiger shrimp Penaeus monodon and the “SEAFDEC Indigenous Probiotic”. Bacterial parameters investigated consisted of: 1) inherent bacterial population, 2) Total Bacterial Count (TBC), 3) effect on Vibrio harveyi, and 4) presumptive Vibrio populations. Results showed that upon activation, the TBCs of Probiotics A, B, C, F, G and H were precisely as claimed in its product brochure at equal or +/- 1 log difference. In contrast, Probiotics D and E yielded TBCs that were 3 and 2 logs lower than stated in their respective product brochures. At 24 h after pond water inoculation, Probiotics A and E caused an almost 2 logs increased TBCs, Probiotic F a one log increase while no apparent differences from the control were observed in the TBCs of the other test probiotics. The “SEAFDEC Indigenous Probiotic”, Probiotics A, G and H induced the inhibition of luminescent Vibrio by 100% for 48 h exposure, 90% in 24 h, 84-63% in 5-6 days and 77-81% in 5-6 days, respectively. However, such inhibitory effect was not sustained on extended periods. In contrast, the other test Probiotics did not inhibit luminescent Vibrio. On the contrary, Probiotics C, E and F even resulted in a 2 and 1 log increase of the V. harveyi population. For the presumptive Vibrio counts, Probiotics B, E and F had 1-2 logs higher numbers of green colonies than controls while Probiotics A and E yielded higher numbers of yellow colonies. This study showed that inoculation of the shrimp pond waters with Probiotics A, C, D, E and F caused at least one log increase in TBCs. The TBCs of the Probiotics in the presence of ammonia, nitrite and phosphate were affected by the presence or absence of aeration.