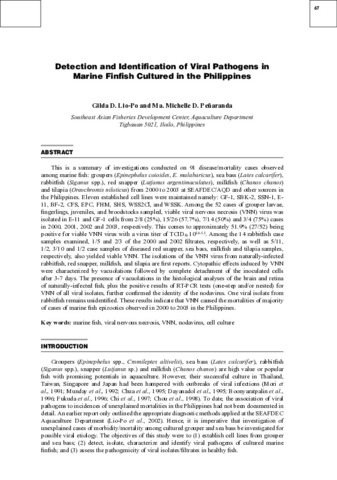 This is a summary of investigations conducted on 91 disease/mortality cases observed among marine fish: groupers (Epinephelus coioides, E. malabaricus), sea bass (Lates calcarifer), rabbitfish (Siganus spp.), red snapper (Lutjanus argentimaculatus), milkfish (Chanos chanos) and tilapia (Oreochromis niloticus) from 2000 to 2003 at SEAFDEC/AQD and other sources in the Philippines. Eleven established cell lines were maintained namely: GF-1, SBK-2, SSN-1, E-11, BF-2, CFS, EPC, FHM, SHS, WSS2Cl, and WSSK. Among the 52 cases of grouper larvae, fingerlings, juveniles, and broodstocks sampled, viable viral nervous necrosis (VNN) virus was isolated in E-11 and GF-1 cells from 2/8 (25%), 15/26 (57.7%), 7/14 (50%) and 3/4 (75%) cases in 2000, 2001, 2002 and 2003, respectively. This comes to approximately 51.9% (27/52) being positive for viable VNN virus with a virus titer of TCID50 105.0-5.5. Among the 14 rabbitfish case samples examined, 1/5 and 2/3 of the 2000 and 2002 filtrates, respectively, as well as 5/11, 1/2, 3/10 and 1/2 case samples of diseased red snapper, sea bass, milkfish and tilapia samples, respectively, also yielded viable VNN. The isolations of the VNN virus from naturally-infected rabbitfish, red snapper, milkfish, and tilapia are first reports. Cytopathic effects induced by VNN were characterized by vacuolations followed by complete detachment of the inoculated cells after 3-7 days. The presence of vacuolations in the histological analyses of the brain and retina of naturally-infected fish, plus the positive results of RT-PCR tests (one-step and/or nested) for VNN of all viral isolates, further confirmed the identity of the nodavirus. One viral isolate from rabbitfish remains unidentified. These results indicate that VNN caused the mortalities of majority of cases of marine fish epizootics observed in 2000 to 2003 in the Philippines.