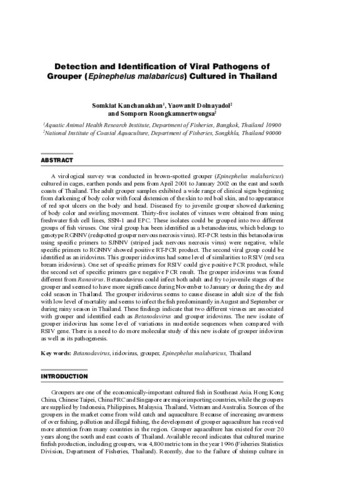 A virological survey was conducted in brown-spotted grouper (Epinephelus malabaricus) cultured in cages, earthen ponds and pens from April 2001 to January 2002 on the east and south coasts of Thailand. The adult grouper samples exhibited a wide range of clinical signs beginning from darkening of body color with focal distension of the skin to red boil skin, and to appearance of red spot ulcers on the body and head. Diseased fry to juvenile grouper showed darkening of body color and swirling movement. Thirty-five isolates of viruses were obtained from using freshwater fish cell lines, SSN-1 and EPC. These isolates could be grouped into two different groups of fish viruses. One viral group has been identified as a betanodavirus, which belongs to genotype RGNNV (redspotted grouper nervous necrosis virus). RT-PCR tests in this betanodavirus using specific primers to SJNNV (striped jack nervous necrosis virus) were negative, while specific primers to RGNNV showed positive RT-PCR product. The second viral group could be identified as an iridovirus. This grouper iridovirus had some level of similarities to RSIV (red sea bream iridovirus). One set of specific primers for RSIV could give positive PCR product, while the second set of specific primers gave negative PCR result. The grouper iridovirus was found different from Ranavirus. Betanodavirus could infect both adult and fry to juvenile stages of the grouper and seemed to have more significance during November to January or during the dry and cold season in Thailand. The grouper iridovirus seems to cause disease in adult size of the fish with low level of mortality and seems to infect the fish predominantly in August and September or during rainy season in Thailand. These findings indicate that two different viruses are associated with grouper and identified each as Betanodavirus and grouper iridovirus. The new isolate of grouper iridovirus has some level of variations in nucleotide sequences when compared with RSIV gene. There is a need to do more molecular study of this new isolate of grouper iridovirus as well as its pathogenesis.