Detection and identification of iridoviral pathogens of freshwater fish in Thailand 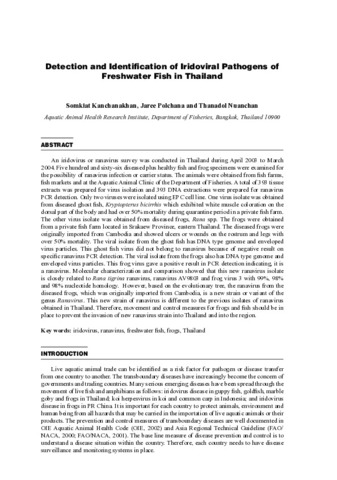 An iridovirus or ranavirus survey was conducted in Thailand during April 2003 to March 2004. Five hundred and sixty-six diseased plus healthy fish and frog specimens were examined for the possibility of ranavirus infection or carrier status. The animals were obtained from fish farms, fish markets and at the Aquatic Animal Clinic of the Department of Fisheries. A total of 393 tissue extracts was prepared for virus isolation and 393 DNA extractions were prepared for ranavirus PCR detection. Only two viruses were isolated using EPC cell line. One virus isolate was obtained from diseased ghost fish, Kryptopterus bicirrhis which exhibited white muscle coloration on the dorsal part of the body and had over 50% mortality during quarantine period in a private fish farm. The other virus isolate was obtained from diseased frogs, Rana spp. The frogs were obtained from a private fish farm located in Srakaew Province, eastern Thailand. The diseased frogs were originally imported from Cambodia and showed ulcers or wounds on the rostrum and legs with over 50% mortality. The viral isolate from the ghost fish has DNA type genome and enveloped virus particles. This ghost fish virus did not belong to ranavirus because of negative result on specific ranavirus PCR detection. The viral isolate from the frogs also has DNA type genome and enveloped virus particles. This frog virus gave a positive result in PCR detection indicating, it is a ranavirus. Molecular characterization and comparison showed that this new ranavirus isolate is closely related to Rana tigrina ranavirus, ranavirus AV9803 and frog virus 3 with 99%, 98% and 98% nucleotide homology. However, based on the evolutionary tree, the ranavirus from the diseased frogs, which was originally imported from Cambodia, is a new strain or variant of the genus Ranavirus. This new strain of ranavirus is different to the previous isolates of ranavirus obtained in Thailand. Therefore, movement and control measures for frogs and fish should be in place to prevent the invasion of new ranavirus strain into Thailand and into the region.