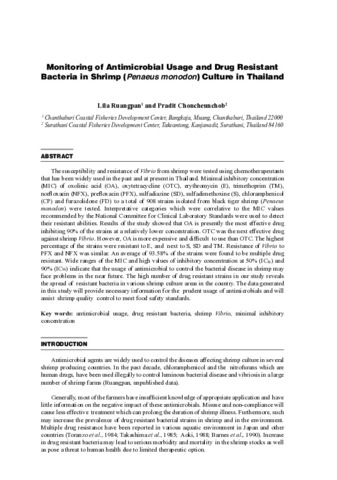 The susceptibility and resistance of Vibrio from shrimp were tested using chemotherapeutants that has been widely used in the past and at present in Thailand. Minimal inhibitory concentration (MIC) of oxolinic acid (OA), oxytetracycline (OTC), erythromycin (E), trimethoprim (TM), norfloxacin (NFX), prefloxacin (PFX), sulfadiazine (SD), sulfadimethoxine (S), chloramphenicol (CP) and furazolidone (FD) to a total of 908 strains isolated from black tiger shrimp (Penaeus monodon) were tested. Interpretative categories which were correlative to the MIC values recommended by the National Committee for Clinical Laboratory Standards were used to detect their resistant abilities. Results of the study showed that OA is presently the most effective drug inhibiting 90% of the strains at a relatively lower concentration. OTC was the next effective drug against shrimp Vibrio. However, OA is more expensive and difficult to use than OTC. The highest percentage of the strains were resistant to E, and next to S, SD and TM. Resistance of Vibrio to PFX and NFX was similar. An average of 93.58% of the strains were found to be multiple drug resistant. Wide ranges of the MIC and high values of inhibitory concentration at 50% (IC50) and 90% (IC90) indicate that the usage of antimicrobial to control the bacterial disease in shrimp may face problems in the near future. The high number of drug resistant strains in our study reveals the spread of resistant bacteria in various shrimp culture areas in the country. The data generated in this study will provide necessary information for the prudent usage of antimicrobials and will assist shrimp quality control to meet food safety standards.