Hatchery and pond culture of Macrobrachium rosenbergii in northern Mindanao 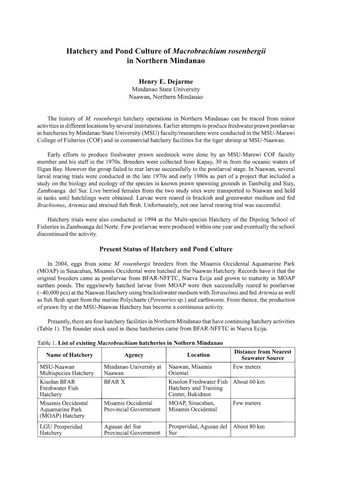 The history of M. rosenbergii hatchery operations in Northern Mindanao can be traced from minor activities in different locations by several institutions. Earlier attempts to produce freshwater prawn postlarvae in hatcheries by Mindanao State University (MSU) faculty/researchers were conducted in the MSU-Marawi College of Fisheries (COF) and in commercial hatchery facilities for the tiger shrimp at MSU-Naawan. Early efforts to produce freshwater prawn seedstock were done by an MSU-Marawi COF faculty member and his staff in the 1970s. Breeders were collected from Kapay, 30 m from the oceanic waters of Iligan Bay. However the group failed to rear larvae successfully to the postlarval stage. In Naawan, several larval rearing trials were conducted in the late 1970s and early 1980s as part of a project that included a study on the biology and ecology of the species in known prawn spawning grounds in Tambulig and Siay, Zamboanga del Sur. Live berried females from the two study sites were transported to Naawan and held in tanks until hatchlings were obtained. Larvae were reared in brackish and greenwater medium and fed Brachionus, Artemia and strained fish flesh. Unfortunately, not one larval rearing trial was successful. Hatchery trials were also conducted in 1994 at the Multi-species Hatchery of the Dipolog School of Fisheries in Zamboanga del Norte. Few postlarvae were produced within one year and eventually the school discontinued the activity.