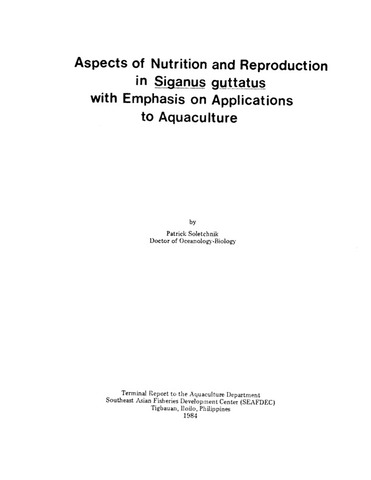 The rabbitfish Siganus guttatus, one of the common species in Philippine waters is being studied at the Aquaculture Department of the Southeast Asian Fisheries Development Center (SEAFDEC) in Iloilo, Philippines for eventual mass seed production. Several problems were encountered in the rearing of this species in the hatchery. One of those suspected was egg quality. This study was conducted to investigate the problem. At the start of the study, the orientation was to improve the feeding management of the broodstock, and to monitor variables strictly dependent on the parents: maturation, spawning frequency, fertilization rates, egg diameter, hatching rates, normality of larvae. Subsequently, the quality of the larvae was investigated using variables such as size at hatching, speed of yolk resorption and early growth. The later part of the study included feeding of broodstocks with formulated experimental diets and rearing the larvae produced. On the whole, this investigation included several aspects of the biology of S. guttatus and provides information on nutrition, growth and reproduction, with emphasis on their applications to aquaculture.