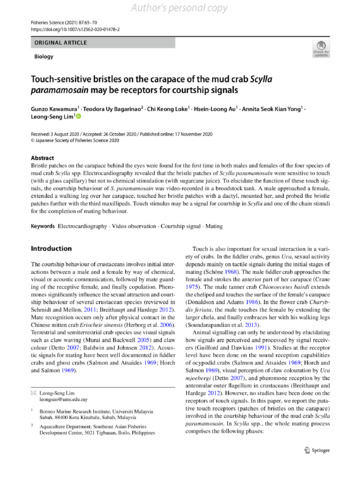 Bristle patches on the carapace behind the eyes were found for the first time in both males and females of the four species of mud crab Scylla spp. Electrocardiography revealed that the bristle patches of Scylla paramamosain were sensitive to touch (with a glass capillary) but not to chemical stimulation (with sugarcane juice). To elucidate the function of these touch signals, the courtship behaviour of S. paramamosain was video-recorded in a broodstock tank. A male approached a female, extended a walking leg over her carapace, touched her bristle patches with a dactyl, mounted her, and probed the bristle patches further with the third maxillipeds. Touch stimulus may be a signal for courtship in Scylla and one of the chain stimuli for the completion of mating behaviour.