Understanding biosecurity: knowledge, attitudes and practices of seaweed farmers in the Philippines 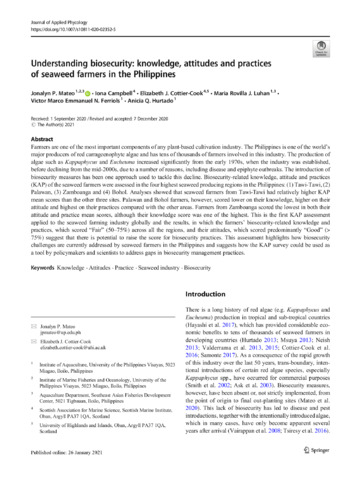 Farmers are one of the most important components of any plant-based cultivation industry. The Philippines is one of the world’s major producers of red carrageenophyte algae and has tens of thousands of farmers involved in this industry. The production of algae such as Kappaphycus and Eucheuma increased significantly from the early 1970s, when the industry was established, before declining from the mid-2000s, due to a number of reasons, including disease and epiphyte outbreaks. The introduction of biosecurity measures has been one approach used to tackle this decline. Biosecurity-related knowledge, attitude and practices (KAP) of the seaweed farmers were assessed in the four highest seaweed producing regions in the Philippines: (1) Tawi-Tawi, (2) Palawan, (3) Zamboanga and (4) Bohol. Analyses showed that seaweed farmers from Tawi-Tawi had relatively higher KAP mean scores than the other three sites. Palawan and Bohol farmers, however, scored lower on their knowledge, higher on their attitude and highest on their practices compared with the other areas. Farmers from Zamboanga scored the lowest in both their attitude and practice mean scores, although their knowledge score was one of the highest. This is the first KAP assessment applied to the seaweed farming industry globally and the results, in which the farmers’ biosecurity-related knowledge and practices, which scored “Fair” (50–75%) across all the regions, and their attitudes, which scored predominantly “Good” (> 75%) suggest that there is potential to raise the score for biosecurity practices. This assessment highlights how biosecurity challenges are currently addressed by seaweed farmers in the Philippines and suggests how the KAP survey could be used as a tool by policymakers and scientists to address gaps in biosecurity management practices.