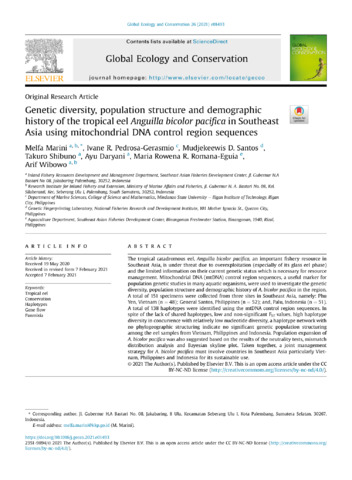 The tropical catadromous eel, Anguilla bicolor pacifica, an important fishery resource in Southeast Asia, is under threat due to overexploitation (especially of its glass eel phase) and the limited information on their current genetic status which is necessary for resource management. Mitochondrial DNA (mtDNA) control region sequences, a useful marker for population genetic studies in many aquatic organisms, were used to investigate the genetic diversity, population structure and demographic history of A. bicolor pacifica in the region. A total of 151 specimens were collected from three sites in Southeast Asia, namely: Phu Yen, Vietnam (n = 48); General Santos, Philippines (n = 52); and, Palu, Indonesia (n = 51). A total of 138 haplotypes were identified using the mtDNA control region sequences. In spite of the lack of shared haplotypes, low and non-significant \(F_{ST}\) values, high haplotype diversity in concurrence with relatively low nucleotide diversity, a haplotype network with no phylogeographic structuring indicate no significant genetic population structuring among the eel samples from Vietnam, Philippines and Indonesia. Population expansion of A. bicolor pacifica was also suggested based on the results of the neutrality tests, mismatch distribution analysis and Bayesian skyline plot. Taken together, a joint management strategy for A. bicolor pacifica must involve countries in Southeast Asia particularly Vietnam, Philippines and Indonesia for its sustainable use.

Except where otherwise noted, this item's license is described as Attribution-NonCommercial-NoDerivatives 4.0 International