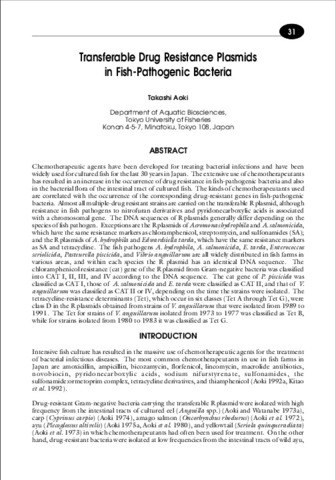 Chemotherapeutic agents have been developed for treating bacterial infections and have been widely used for cultured fish for the last 30 years in Japan. The extensive use of chemotherapeutants has resulted in an increase in the occurrence of drug resistance in fish-pathogenic bacteria and also in the bacterial flora of the intestinal tract of cultured fish. The kinds of chemotherapeutants used are correlated with the occurrence of the corresponding drug-resistant genes in fish-pathogenic bacteria. Almost all multiple-drug resistant strains are carried on the transferable R plasmid, although resistance in fish pathogens to nitrofuran derivatives and pyridonecarboxylic acids is associated with a chromosomal gene. The DNA sequences of R plasmids generally differ depending on the species of fish pathogen. Exceptions are the R plasmids of Aeromonas hydrophila and A. salmonicida, which have the same resistance markers as chloramphenicol, streptomycin, and sulfonamides (SA); and the R plasmids of A. hydrophila and Edwardsiella tarda, which have the same resistance markers as SA and tetracycline. The fish pathogens A. hydrophila, A. salmonicida, E. tarda, Enterococcus seriolicida, Pasteurella piscicida, and Vibrio anguillarum are all widely distributed in fish farms in various areas, and within each species the R plasmid has an identical DNA sequence. The chloramphenicol resistance (cat) gene of the R plasmid from Gram-negative bacteria was classified into CAT I, II, III, and IV according to the DNA sequence. The cat gene of P. piscicida was classified as CAT I, those of A. salmonicida and E. tarda were classified as CAT II, and that of V. anguillarum was classified as CAT II or IV, depending on the time the strains were isolated. The tetracycline-resistance determinants (Tet), which occur in six classes (Tet A through Tet G), were class D in the R plasmids obtained from strains of V. anguillarum that were isolated from 1989 to 1991. The Tet for strains of V. anguillarum isolated from 1973 to 1977 was classified as Tet B, while for strains isolated from 1980 to 1983 it was classified as Tet G.