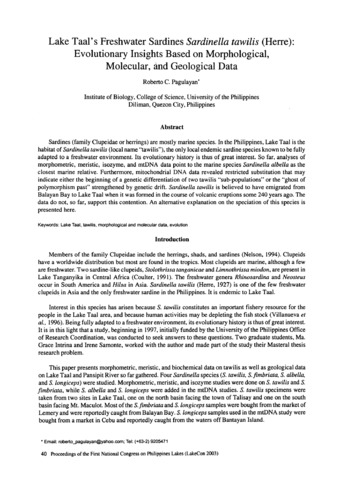 Sardines (family Clupeidae or herrings) are mostly marine species. In the Philippines, Lake Taal is the habitat of Sardinella tawilis (local name tawilis ), the only local endemic sardine species known to be fully adapted to a freshwater environment. Its evolutionary history is thus of great interest. So far, analyses of morphometric, meristic, isozyme, and mtDNA data point to the marine species Sardinella albella as the closest marine relative. Furthermore, mitochondrial DNA data revealed restricted substitution that may indicate either the beginning of a genetic differentiation of two tawilis sub-populations or the ghost of polymorphism past strengthened by genetic drift. Sardinella tawilis is believed to have emigrated from Balayan Bay to Lake Taal when it was formed in the course of volcanic eruptions some 240 years ago. The data do not, so far, support this contention. An alternative explanation on the speciation of this species is presented here.