Translocation of the clupeid Sardinella tawilis to another lake in the Philippines: A proposal and ecological considerations 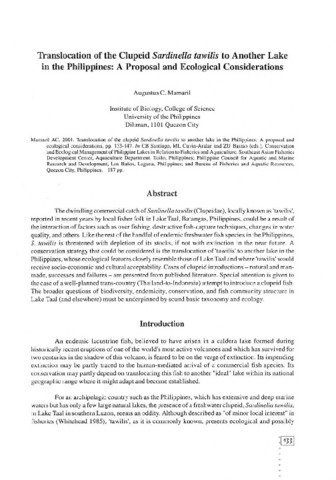 The dwindling commercial catch of Sardinella tawilis (Clupeidae), locally known as 'tawilis', reported in recent years by local fisher folk in Lake Taal, Batangas, Philippines, could be a result of the interaction of factors such as over fishing, destructive fish-capture techniques, changes in water quality, and others. Like the rest of the handful of endemic freshwater fish species in the Philippines, S. tawilis is threatened with depletion of its stocks, if not with extinction in the near future. A conservation strategy that could be considered is the translocation of 'tawilis' to another lake in the Philippines, whose ecological features closely resemble those of Lake Taal and where 'tawilis' would receive socio-economic and cultural acceptability. Cases of clupeid introductions - natural and man-made, successes and failures - are presented from published literature. Special attention is given to the case of a well-planned trans-country (Thailand-to-Indonesia) attempt to introduce a clupeid fish. The broader questions of biodiversity, endemicity, conservation, and fish community structure in Lake Taal (and elsewhere) must be underpinned by sound basic taxonomy and ecology.