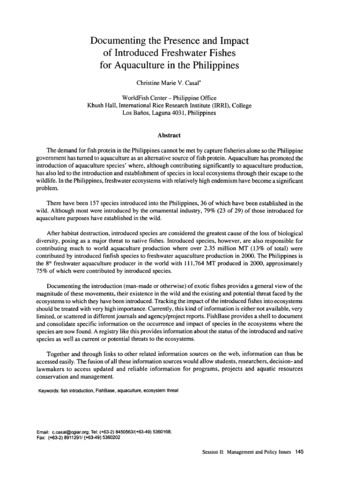 The demand for fish protein in the Philippines cannot be met by capture fisheries alone so the Philippine government has turned to aquaculture as an alternative source of fish protein. Aquaculture has promoted the introduction of aquaculture species where, although contributing significantly to aquaculture production, has also led to the introduction and establishment of species in local ecosystems through their escape to the wildlife. In the Philippines, freshwater ecosystems with relatively high endemism have become a significant problem. There have been 157 species introduced into the Philippines, 36 of which have been established in the wild. Although most were introduced by the ornamental industry, 79% (23 of 29) of those introduced for aquaculture purposes have established in the wild. After habitat destruction, introduced species are considered the greatest cause of the loss of biological diversity, posing as a major threat to native fishes. Introduced species, however, are also responsible for contributing much to world aquaculture production where over 2.35 million MT (13% of total) were contributed by introduced finfish species to freshwater aquaculture production in 2000. The Philippines is the 8th freshwater aquaculture producer in the world with 111,764 MT produced in 2000, approximately 75% of which were contributed by introduced species. Documenting the introduction (man-made or otherwise) of exotic fishes provides a general view of the magnitude of these movements, their existence in the wild and the existing and potential threat faced by the ecosystems to which they have been introduced. Tracking the impact of the introduced fishes into ecosystems should be treated with very high importance. Currently, this kind of information is either not available, very limited, or scattered in different journals and agency/project reports. FishBase provides a shell to document and consolidate specific information on the occurrence and impact of species in the ecosystems where the species are now found. A registry like this provides information about the status of the introduced and native species as well as current or potential threats to the ecosystems. Together and through links to other related information sources on the web, information can thus be accessed easily. The fusion of all these information sources would allow students, researchers, decision- and lawmakers to access updated and reliable information for programs, projects and aquatic resources conservation and management.