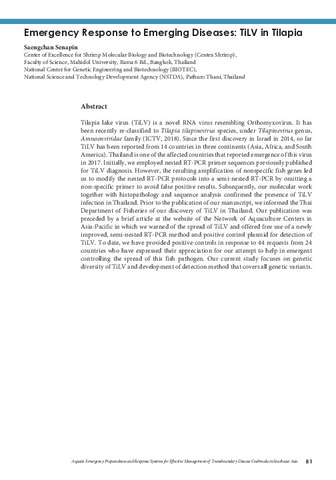 Tilapia lake virus (TiLV) is a novel RNA virus resembling Orthomyxovirus. It has been recently re-classified to Tilapia tilapinevirus species, under Tilapinevirus genus, Amnoonviridae family (ICTV, 2018). Since the first discovery in Israel in 2014, so far TiLV has been reported from 14 countries in three continents (Asia, Africa, and South America). Thailand is one of the affected countries that reported emergence of this virus in 2017. Initially, we employed nested RT-PCR primer sequences previously published for TiLV diagnosis. However, the resulting amplification of nonspecific fish genes led us to modify the nested RT-PCR protocols into a semi-nested RT-PCR by omitting a non-specific primer to avoid false positive results. Subsequently, our molecular work together with histopathology and sequence analysis confirmed the presence of TiLV infection in Thailand. Prior to the publication of our manuscript, we informed the Thai Department of Fisheries of our discovery of TiLV in Thailand. Our publication was preceded by a brief article at the website of the Network of Aquaculture Centers in Asia-Pacific in which we warned of the spread of TiLV and offered free use of a newly improved, semi-nested RT-PCR method and positive control plasmid for detection of TiLV. To date, we have provided positive controls in response to 44 requests from 24 countries who have expressed their appreciation for our attempt to help in emergent controlling the spread of this fish pathogen. Our current study focuses on genetic diversity of TiLV and development of detection method that covers all genetic variants.