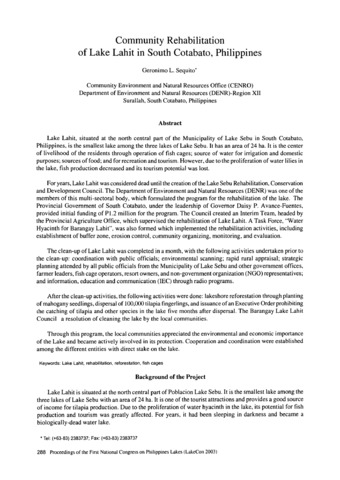 Lake Lahit, situated at the north central part of the Municipality of Lake Sebu in South Cotabato, Philippines, is the smallest lake among the three lakes of Lake Sebu. It has an area of 24 ha. It is the center of livelihood of the residents through operation of fish cages; source of water for irrigation and domestic purposes; sources of food; and for recreation and tourism. However, due to the proliferation of water lilies in the lake, fish production decreased and its tourism potential was lost. For years, Lake Lahit was considered dead until the creation of the Lake Sebu Rehabilitation, Conservation and Development Council. The Department of Environment and Natural Resources (DENR) was one of the members of this multi-sectoral body, which formulated the program for the rehabilitation of the lake. The Provincial Government of South Cotabato, under the leadership of Governor Daisy P. Avance-Fuentes, provided initial funding of P1.2 million for the program. The Council created an Interim Team, headed by the Provincial Agriculture Office, which supervised the rehabilitation of Lake Lahit. A Task Force, Water Hyacinth for Barangay Lahit , was also formed which implemented the rehabilitation activities, including establishment of buffer zone, erosion control, community organizing, monitoring, and evaluation. The clean-up of Lake Lahit was completed in a month, with the following activities undertaken prior to the clean-up: coordination with public officials; environmental scanning; rapid rural appraisal; strategic planning attended by all public officials from the Municipality of Lake Sebu and other government offices, farmer leaders, fish cage operators, resort owners, and non-government organization (NGO) representatives; and information, education and communication (IEC) through radio programs. After the clean-up activities, the following activities were done: lakeshore reforestation through planting of mahogany seedlings, dispersal of 100,000 tilapia fingerlings, and issuance of an Executive Order prohibiting the catching of tilapia and other species in the lake five months after dispersal. The Barangay Lake Lahit Council a resolution of cleaning the lake by the local communities. Through this program, the local communities appreciated the environmental and economic importance of the Lake and became actively involved in its protection. Cooperation and coordination were established among the different entities with direct stake on the lake.