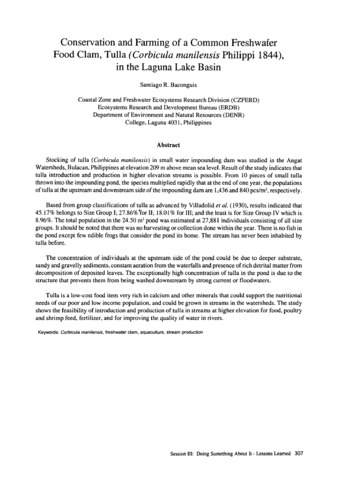 Stocking of tulla (Corbicula manilensis) in small water impounding dam was studied in the Angat Watersheds, Bulacan, Philippines at elevation 209 m above mean sea level. Result of the study indicates that tulla introduction and production in higher elevation streams is possible. From 10 pieces of small tulla thrown into the impounding pond, the species multiplied rapidly that at the end of one year, the populations of tulla at the upstream and downstream side of the impounding dam are 1,436 and 840 pcs/m2, respectively. Based from group classifications of tulla as advanced by Villadolid et al. (1930), results indicated that 45.17% belongs to Size Group I; 27.86% for II; 18.01% for III; and the least is for Size Group IV which is 8.96%. The total population in the 24.50 m2 pond was estimated at 27,881 individuals consisting of all size groups. It should be noted that there was no harvesting or collection done within the year. There is no fish in the pond except few edible frogs that consider the pond its home. The stream has never been inhabited by tulla before. The concentration of individuals at the upstream side of the pond could be due to deeper substrate, sandy and gravelly sediments, constant aeration from the waterfalls and presence of rich detrital matter from decomposition of deposited leaves. The exceptionally high concentration of tulla in the pond is due to the structure that prevents them from being washed downstream by strong current or flood waters. Tulla is a low-cost food item very rich in calcium and other minerals that could support the nutritional needs of our poor and low income population, and could be grown in streams in the watersheds. The study shows the feasibility of introduction and production of tulla in streams at higher elevation for food, poultry and shrimp feed, fertilizer, and for improving the quality of water in rivers.