Grey literature usage among Filipino aquaculture researchers: A bibliometric analysis of research from 2009 to 2018 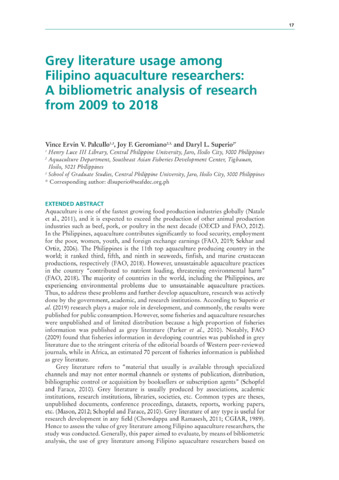 Aquaculture is one of the fastest growing food production industries globally (Natale et al., 2011), and it is expected to exceed the production of other animal production industries such as beef, pork, or poultry in the next decade (OECD and FAO, 2012). In the Philippines, aquaculture contributes significantly to food security, employment for the poor, women, youth, and foreign exchange earnings (FAO, 2019; Sekhar and Ortiz, 2006). The Philippines is the 11th top aquaculture producing country in the world; it ranked third, fifth, and ninth in seaweeds, finfish, and marine crustacean productions, respectively (FAO, 2018). However, unsustainable aquaculture practices in the country “contributed to nutrient loading, threatening environmental harm” (FAO, 2018). The majority of countries in the world, including the Philippines, are experiencing environmental problems due to unsustainable aquaculture practices. Thus, to address these problems and further develop aquaculture, research was actively done by the government, academic, and research institutions. According to Superio et al. (2019) research plays a major role in development, and commonly, the results were published for public consumption. However, some fisheries and aquaculture researches were unpublished and of limited distribution because a high proportion of fisheries information was published as grey literature (Parker et al., 2010). Notably, FAO (2009) found that fisheries information in developing countries was published in grey literature due to the stringent criteria of the editorial boards of Western peer-reviewed journals, while in Africa, an estimated 70 percent of fisheries information is published as grey literature.