Emerging shrimp diseases and innovations to prevent their spread 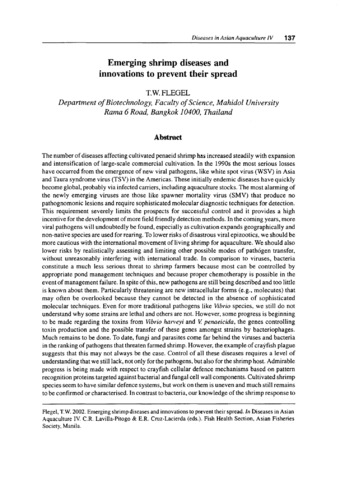 The number of diseases affecting cultivated penaeid shrimp has increased steadily with expansion and intensification of large-scale commercial cultivation. In the 1990s the most serious losses have occurred from the emergence of new viral pathogens, like white spot virus (WSV) in Asia and Taura syndrome virus (TSV) in the Americas. These initially endemic diseases have quickly become global, probably via infected carriers, including aquaculture stocks. The most alarming of the newly emerging viruses are those like spawner mortality virus (SMV) that produce no pathognomonic lesions and require sophisticated molecular diagnostic techniques for detection. This requirement severely limits the prospects for successful control and it provides a high incentive for the development of more field friendly detection methods. In the coming years, more viral pathogens will undoubtedly be found, especially as cultivation expands geographically and non-native species are used for rearing. To lower risks of disastrous viral epizootics, we should be more cautious with the international movement of living shrimp for aquaculture. We should also lower risks by realistically assessing and limiting other possible modes of pathogen transfer, without unreasonably interfering with international trade. In comparison to viruses, bacteria constitute a much less serious threat to shrimp farmers because most can be controlled by appropriate pond management techniques and because proper chemotherapy is possible in the event of management failure. In spite of this, new pathogens are still being described and too little is known about them. Particularly threatening are new intracellular forms (e.g., molecutes) that may often be overlooked because they cannot be detected in the absence of sophisticated molecular techniques. Even for more traditional pathogens like Vibrio species, we still do not understand why some strains are lethal and others are not. However, some progress is beginning to be made regarding the toxins from Vibrio harveyi and V. penaeicida, the genes controlling toxin production and the possible transfer of these genes amongst strains by bacteriophages. Much remains to be done. To date, fungi and parasites come far behind the viruses and bacteria in the ranking of pathogens that threaten farmed shrimp. However, the example of crayfish plague suggests that this may not always be the case. Control of all these diseases requires a level of understanding that we still lack, not only for the pathogens, but also for the shrimp host. Admirable progress is being made with respect to crayfish cellular defence mechanisms based on pattern recognition proteins targeted against bacterial and fungal cell wall components. Cultivated shrimp species seem to have similar defence systems, but work on them is uneven and much still remains to be confirmed or characterised. In contrast to bacteria, our knowledge of the shrimp response to viral pathogens is almost totally lacking and this is a serious shortcoming given the staggering losses the viruses have caused. We must accelerate investigations at the molecular level for both the host shrimp and its pathogens in order to rationally assess and improve the benefits of proposed therapies and preventative measures for disease. This work must go hand in hand with a concerted effort to develop certified domesticated shrimp stocks and secure, but affordable, cultivation systems.