Significant diseases of molluscs in the Asia-Pacific region 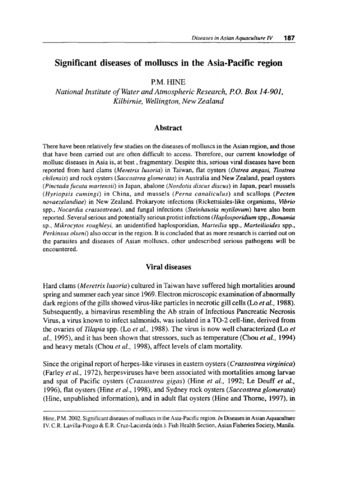 There have been relatively few studies on the diseases of molluscs in the Asian region, and those that have been carried out are often difficult to access. Therefore, our current knowledge of mollusc diseases in Asia is, at best, fragmentary. Despite this, serious viral diseases have been reported from hard clams (Meretrix lusoria) in Taiwan, flat oysters (Ostrea angasi, Tiostrea chilensis) and rock oysters (Saccostrea glomerata) in Australia and New Zealand, pearl oysters (Pinctada fucata martensii) in Japan, abalone (Nordotis discus discus) in Japan, pearl mussels (Hyriopsis cumingi) in China, and mussels (Perna canaliculus) and scallops (Pecten novaezelandiae) in New Zealand. Prokaryote infections (Rickettsiales-like organisms, Vibrio spp., Nocardia crassostreae), and fungal infections (Steinhausia mytilovum) have also been reported. Several serious and potentially serious protist infections (Haplosporidium spp., Bonamia sp., Mikrocytos roughleyi, an unidentified haplosporidian, Marteilia spp., Marteilioides spp., Perkinsus olseni) also occur in the region. It is concluded that as more research is carried out on the parasites and diseases of Asian molluscs, other undescribed serious pathogens will be encountered.