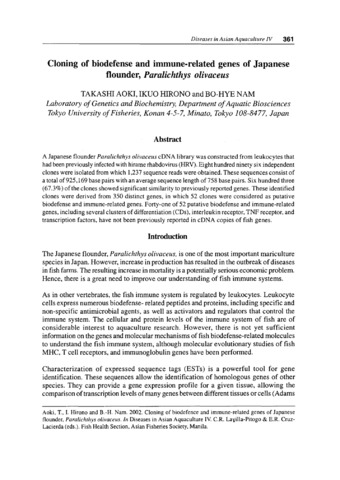 A Japanese flounder Paralichthys olivaceus cDNA library was constructed from leukocytes that had been previously infected with hirame rhabdovirus (HRV). Eight hundred ninety six independent clones were isolated from which 1,237 sequence reads were obtained. These sequences consist of a total of 925,169 base pairs with an average sequence length of 758 base pairs. Six hundred three (67.3%) of the clones showed significant similarity to previously reported genes. These identified clones were derived from 350 distinct genes, in which 52 clones were considered as putative biodefense and immune-related genes. Forty-one of 52 putative biodefense and immune-related genes, including several clusters of differentiation (CDs), interleukin receptor, TNF receptor, and transcription factors, have not been previously reported in cDNA copies of fish genes.