Problems and challenges of aquaculture in Japan 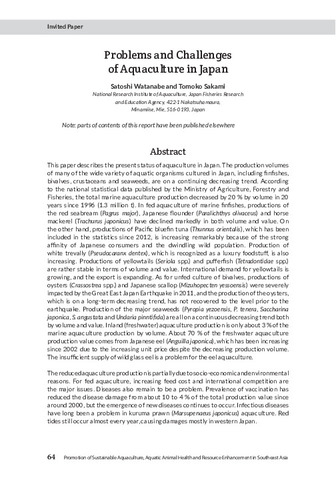 This paper describes the present status of aquaculture in Japan. The production volumes of many of the wide variety of aquatic organisms cultured in Japan, including finfishes, bivalves, crustaceans and seaweeds, are on a continuing decreasing trend. According to the national statistical data published by the Ministry of Agriculture, Forestry and Fisheries, the total marine aquaculture production decreased by 20 % by volume in 20 years since 1996 (1.3 million t). In fed aquaculture of marine finfishes, productions of the red seabream (Pagrus major), Japanese flounder (Paralichthys olivaceus) and horse mackerel (Trachurus japonicus) have declined markedly in both volume and value. On the other hand, productions of Pacific bluefin tuna (Thunnus orientalis), which has been included in the statistics since 2012, is increasing remarkably because of the strong affinity of Japanese consumers and the dwindling wild population. Production of white trevally (Pseudocaranx dentex), which is recognized as a luxury foodstuff, is also increasing. Productions of yellowtails (Seriola spp.) and pufferfish (Tetradontidae spp.) are rather stable in terms of volume and value. International demand for yellowtails is growing, and the export is expanding. As for unfed culture of bivalves, productions of oysters (Crassostrea spp.) and Japanese scallop (Mizuhopecten yessoensis) were severely impacted by the Great East Japan Earthquake in 2011, and the production of the oysters, which is on a long-term decreasing trend, has not recovered to the level prior to the earthquake. Production of the major seaweeds (Pyropia yezoensis, P. tenera, Saccharina japonica, S. angustata and Undaria pinntifida) are all on a continuous decreasing trend both by volume and value. Inland (freshwater) aquaculture production is only about 3 % of the marine aquaculture production by volume. About 70 % of the freshwater aquaculture production value comes from Japanese eel (Anguilla japonica), which has been increasing since 2002 due to the increasing unit price despite the decreasing production volume. The insufficient supply of wild glass eel is a problem for the eel aquaculture. The reduced aquaculture production is partially due to socio-economic and environmental reasons. For fed aquaculture, increasing feed cost and international competition are the major issues. Diseases also remain to be a problem. Prevalence of vaccination has reduced the disease damage from about 10 to 4 % of the total production value since around 2000, but the emergence of new diseases continues to occur. Infectious diseases have long been a problem in kuruma prawn (Marsupenaeus japonicus) aquaculture. Red tides still occur almost every year, causing damages mostly in western Japan. For unfed aquaculture, the reduced production is considered to be related with oligotrophication of coastal waters. Intensive reduction of terrestrial nutrient loads by advances in wastewater treatment is thought to have reduced the seaweed productivity, as well as other primary production, resulting in reduced productivity of not only unfed aquaculture of bivalves but coastal fisheries in general. Social factors are also involved. Production declines of many of these species are partially attributed to the reduced labor force due to aging and insufficient recruitment of farmers. The number of management body of oyster aquaculture, for example, decreased from 4,349 in 1963 to 2,018 in 2013. Structure of aquaculture industry in Japan (mostly privately-owned small business) and strong Japanese currency bring about the weak international market competitiveness.