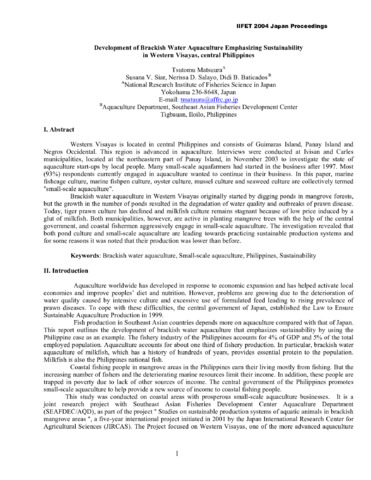 Western Visayas is located in central Philippines and consists of Guimaras Island, Panay Island and Negros Occidental. This region is advanced in aquaculture. Interviews were conducted at Ivisan and Carles municipalities, located at the northeastern part of Panay Island, in November 2003 to investigate the state of aquaculture start-ups by local people. Many small-scale aquafarmers had started in the business after 1997. Most (93%) respondents currently engaged in aquaculture wanted to continue in their business. In this paper, marine fishcage culture, marine fishpen culture, oyster culture, mussel culture and seaweed culture are collectively termed "small-scale aquaculture". Brackish water aquaculture in Western Visayas originally started by digging ponds in mangrove forests, but the growth in the number of ponds resulted in the degradation of water quality and outbreaks of prawn disease. Today, tiger prawn culture has declined and milkfish culture remains stagnant because of low price induced by a glut of milkfish. Both municipalities, however, are active in planting mangrove trees with the help of the central government, and coastal fishermen aggressively engage in small-scale aquaculture. The investigation revealed that both pond culture and small-scale aquaculture are leading towards practicing sustainable production systems and for some reasons it was noted that their production was lower than before.