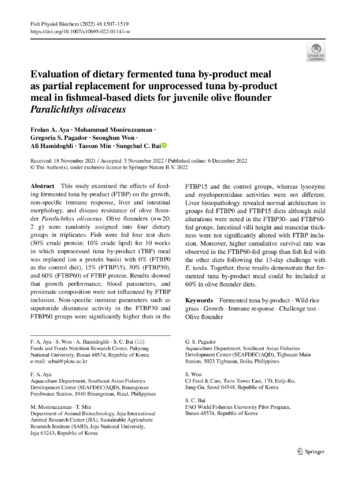 This study examined the effects of feeding fermented tuna by-product (FTBP) on the growth, non-specific immune response, liver and intestinal morphology, and disease resistance of olive flounder Paralichthys olivaceus. Olive flounders (n = 20; 2 g) were randomly assigned into four dietary groups in triplicates. Fish were fed four test diets (50% crude protein; 10% crude lipid) for 10 weeks in which unprocessed tuna by-product (TBP) meal was replaced (on a protein basis) with 0% (FTBP0 as the control diet), 15% (FTBP15), 30% (FTBP30), and 60% (FTBP60) of FTBP protein. Results showed that growth performance, blood parameters, and proximate composition were not influenced by FTBP inclusion. Non-specific immune parameters such as superoxide dismutase activity in the FTBP30 and FTBP60 groups were significantly higher than in the FTBP15 and the control groups, whereas lysozyme and myeloperoxidase activities were not different. Liver histopathology revealed normal architecture in groups fed FTBP0 and FTBP15 diets although mild alterations were noted in the FTBP30- and FTBP60-fed groups. Intestinal villi height and muscular thickness were not significantly altered with FTBP inclusion. Moreover, higher cumulative survival rate was observed in the FTBP60-fed group than fish fed with the other diets following the 13-day challenge with E. tarda. Together, these results demonstrate that fermented tuna by-product meal could be included at 60% in olive flounder diets.