Research activities and accomplishments of the SEAFDEC Aquaculture Department, 1988-1991 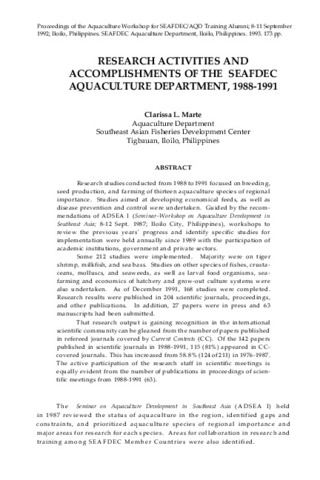 Research studies conducted from 1988 to 1991 focused on breeding, seed production, and farming of thirteen aquaculture species of regional importance. Studies aimed at developing economical feeds, as well as disease prevention and control were undertaken. Guided by the recommendations of ADSEA I (Seminar-Workshop on Aquaculture Development in Southeast Asia; 8-12 Sept. 1987; Iloilo City, Philippines), workshops to review the previous years' progress and identify specific studies for implementation were held annually since 1989 with the participation of academic institutions, government and private sectors. Some 212 studies were implemented. Majority were on tiger shrimp, milkfish, and sea bass. Studies on other species of fishes, crustaceans, molluscs, and seaweeds, as well as larval food organisms, seafarming and economics of hatchery and grow-out culture systems were also undertaken. As of December 1991, 168 studies were completed. Research results were published in 204 scientific journals, proceedings, and other publications. In addition, 27 papers were in press and 63 manuscripts had been submitted. That research output is gaining recognition in the international scientific community can be gleaned from the number of papers published in refereed journals covered by Current Contents (CC). Of the 142 papers published in scientific journals in 1988-1991, 115 (81%) appeared in CCcovered journals. This has increased from 58.8% (124 of 211) in 1976-1987. The active participation of the research staff in scientific meetings is equally evident from the number of publications in proceedings of scientific meetings from 1988-1991 (63).