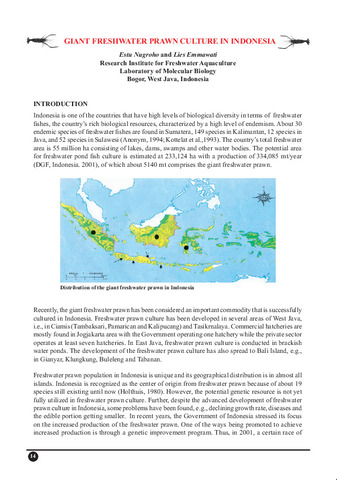 Indonesia is one of the countries that have high levels of biological diversity in terms of freshwater fishes, the country’s rich biological resources, characterized by a high level of endemism. About 30 endemic species of freshwater fishes are found in Sumatera, 149 species in Kalimantan, 12 species in Java, and 52 species in Sulawesi (Anonym, 1994; Kottelat et al.,1993). The country’s total freshwater area is 55 million ha consisting of lakes, dams, swamps and other water bodies. The potential area for freshwater pond fish culture is estimated at 233,124 ha with a production of 334,085 mt/year (DGF, Indonesia. 2001), of which about 5140 mt comprises the giant freshwater prawn.