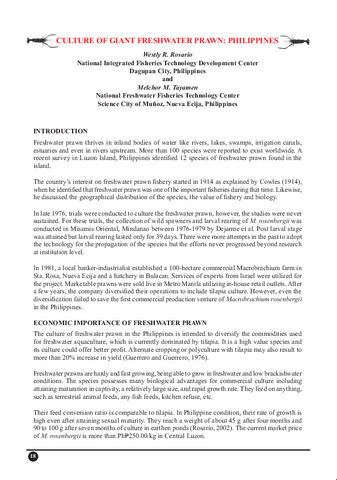 Freshwater prawn thrives in inland bodies of water like rivers, lakes, swamps, irrigation canals, estuaries and even in rivers upstream. More than 100 species were reported to exist worldwide. A recent survey in Luzon Island, Philippines identified 12 species of freshwater prawn found in the island. The country’s interest on freshwater prawn fishery started in 1914 as explained by Cowles (1914), when he identified that freshwater prawn was one of the important fisheries during that time. Likewise, he discussed the geographical distribution of the species, the value of fishery and biology. In late 1976, trials were conducted to culture the freshwater prawn, however, the studies were never sustained. For these trials, the collection of wild spawners and larval rearing of M. rosenbergii was conducted in Misamis Oriental, Mindanao between 1976-1979 by Dejarme et al. Post larval stage was attained but larval rearing lasted only for 39 days. There were more attempts in the past to adopt the technology for the propagation of the species but the efforts never progressed beyond research at institution level. In 1981, a local banker-industrialist established a 100-hectare commercial Macrobrachium farm in Sta. Rosa, Nueva Ecija and a hatchery in Bulacan. Services of experts from Israel were utilized for the project. Marketable prawns were sold live in Metro Manila utilizing in-house retail outlets. After a few years, the company diversified their operations to include tilapia culture. However, even the diversification failed to save the first commercial production venture of Macrobrachium rosenbergii in the Philippines.