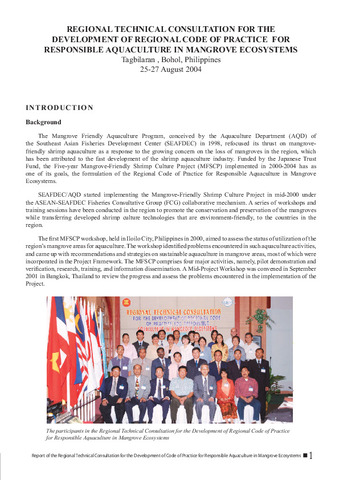 The Mangrove Friendly Aquaculture Program, conceived by the Aquaculture Department (AQD) of the Southeast Asian Fisheries Development Center (SEAFDEC) in 1998, refocused its thrust on mangrove-friendly shrimp aquaculture as a response to the growing concern on the loss of mangroves in the region, which has been attributed to the fast development of the shrimp aquaculture industry. Funded by the Japanese Trust Fund, the Five-year Mangrove-Friendly Shrimp Culture Project (MFSCP) implemented in 2000-2004 has as one of its goals, the formulation of the Regional Code of Practice for Responsible Aquaculture in Mangrove Ecosystems. SEAFDEC/AQD started implementing the Mangrove-Friendly Shrimp Culture Project in mid-2000 under the ASEAN-SEAFDEC Fisheries Consultative Group (FCG) collaborative mechanism. A series of workshops and training sessions have been conducted in the region to promote the conservation and preservation of the mangroves while transferring developed shrimp culture technologies that are environment-friendly, to the countries in the region. The first MFSCP workshop, held in Iloilo City, Philippines in 2000, aimed to assess the status of utilization of the region’s mangrove areas for aquaculture. The workshop identified problems encountered in such aquaculture activities, and came up with recommendations and strategies on sustainable aquaculture in mangrove areas, most of which were incorporated in the Project Framework. The MFSCP comprises four major activities, namely, pilot demonstration and verification, research, training, and information dissemination. A Mid-Project Workshop was convened in September 2001 in Bangkok, Thailand to review the progress and assess the problems encountered in the implementation of the Project.