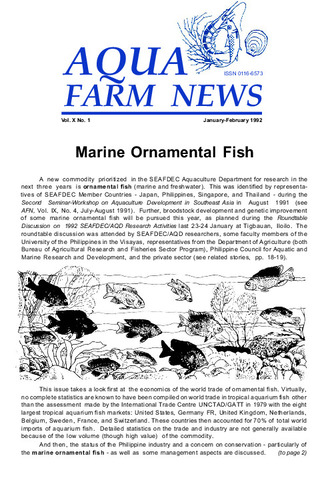 This issue takes a look first at the economics of the world trade of ornamental fish. Virtually, no complete statistics are known to have been compiled on world trade in tropical aquarium fish other than the assessment made by the International Trade Centre UNCTAD/GATT in 1979 with the eight largest tropical aquarium fish markets: United States, Germany FR, United Kingdom, Netherlands, Belgium, Sweden, France, and Switzerland. These countries then accounted for 70% of total world imports of aquarium fish. Detailed statistics on the trade and industry are not generally available because of the low volume (though high value) of the commodity.And then, the status of the Philippine industry and a concern on conservation - particularly of the marine ornamental fish - as well as some management aspects are discussed.