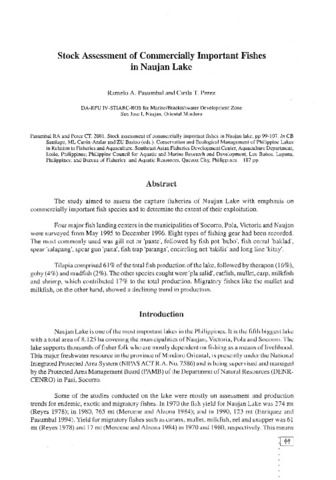 The study aimed to assess the capture fisheries of Naujan Lake with emphasis on commercially important fish species and to determine the extent of their exploitation. Four major fish landing centers in the municipalities of Socorro, Pola, Victoria and Naujan were surveyed from May 1995 to December 1996. Eight types of fishing gear had been recorded. The most commonly used was gill net or 'pante', followed by fish pot 'bubo', fish corral 'baklad', spear 'salapang', spear gun 'pana', fish trap 'patanga', encircling net 'takilis' and long line 'kitay'. Tilapia comprised 61% of the total fish production of the lake, followed by therapon (16%), goby (4%) and mudfish (2%). The other species caught were 'pla salid', catfish, mullet, carp, milkfish and shrimp, which contributed 17% to the total production. Migratory fishes like the mullet and milkfish, on the other hand, showed a declining trend in production.