Autoecology of an endemic calanoid copepod: The first step in biodiversity conservation in Lakes 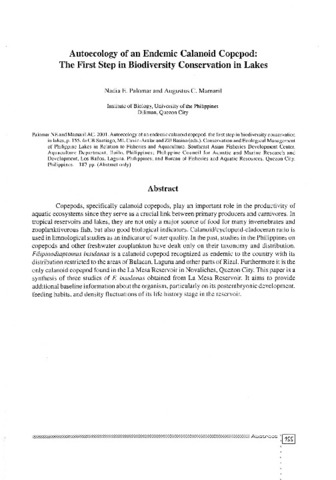 Copepods, specifically calanoid copepods, play an important role in the productivity of aquatic ecosystems since they serve as a crucial link between primary producers and carnivores. In tropical reservoirs and lakes, they are not only a major source of food for many invertebrates and zooplanktivorous fish, but also good biological indicators. Calanoid/cyclopoid-cladoceran ratio is used in limnological studies as an indicator of water quality. In the past, studies in the Philippines on copepods and other freshwater zooplankton have dealt only on their taxonomy and distribution. Filipinodiaptomus insulanus is a calanoid copepod recognized as endemic to the country with its distribution restricted to the areas of Bulacan, Laguna and other parts of Rizal. Furthermore it is the only calanoid copepod found in the La Mesa Reservoir in Novaliches, Quezon City. This paper is a synthesis of three studies of F. insulanus obtained from La Mesa Reservoir. It aims to provide additional baseline information about the organism, particularly on its postembryonic development, feeding habits, and density fluctuations of its life history stage in the reservoir.