Pasig River backflow and its effect on the water quality of Laguna de Bay, Philippines 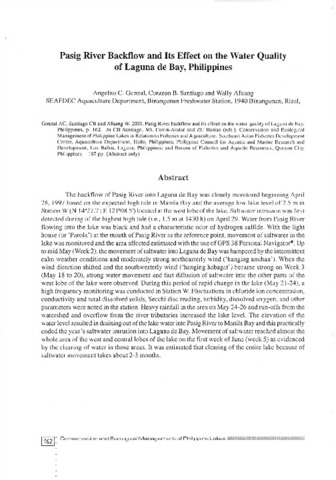 The backflow of Pasig River into Laguna de Bay was closely monitored beginning April 28, 1997 based on the expected high tide in Manila Bay and the average low lake level of 2.5 m in Station W (N 14°27.7'; E 121°08.5') located at the west lobe of the lake. Saltwater intrusion was first detected during of the highest high tide (i.e., 1.5 m at 1430 h) on April 29. Water from Pasig River flowing into the lake was black and had a characteristic odor of hydrogen sulfide. With the light house (or 'Parola') at the mouth of Pasig River as the reference point, movement of saltwater in the lake was monitored and the area affected estimated with the use of GPS 38 Personal Navigator®. Up to mid May (Week 2), the movement of saltwater into Laguna de Bay was hampered by the intermittent calm weather conditions and moderately strong northeasterly wind ('hanging amihan'). When the wind direction shifted and the southwesterly wind ('hanging habagat') became strong on Week 3 (May 18 to 20), strong water movement and fast diffusion of saltwater into the other parts of the west lobe of the lake were observed. During this period of rapid change in the lake (May 21-24), a high frequency monitoring was conducted in Station W. Fluctuations in chloride ion concentration, conductivity and total dissolved solids, Secchi disc reading, turbidity, dissolved oxygen, and other parameters were noted in the station. Heavy rainfall in the area on May 24-26 and run-offs from the watershed and overflow from the river tributaries increased the lake level. The elevation of the water level resulted in draining out of the lake water into Pasig River to Manila Bay and this practically ended the year's saltwater intrusion into Laguna de Bay. Movement of saltwater reached almost the whole area of the west and central lobes of the lake on the first week of June (week 5) as evidenced by the clearing of water in those areas. It was estimated that clearing of the entire lake because of saltwater movement takes about 2-3 months.