The present status of Penaeus vannamei and other exotic shrimp culture in Indonesia. 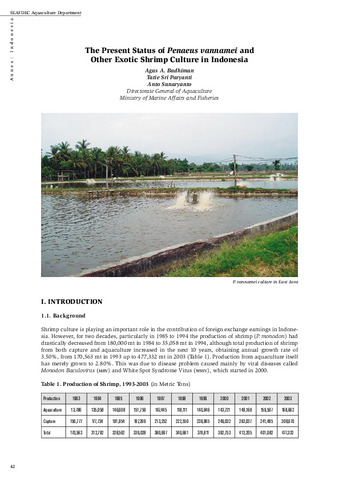 Shrimp culture is playing an important role in the contribution of foreign exchange earnings in Indonesia. However, for two decades, particularly in 1985 to 1994 the production of shrimp (P. monodon) had drastically decreased from 180,000 mt in 1984 to 35,058 mt in 1994, although total production of shrimp from both capture and aquaculture increased in the next 10 years, obtaining annual growth rate of 3.50%, from 170,563 mt in 1993 up to 477,332 mt in 2003. Production from aquaculture itself has merely grown to 2.80%. This was due to disease problem caused mainly by viral diseases called Monodon Baculovirus (MBV) and White Spot Syndrome Virus (WSSV), which started in 2000. The total shrimp export showed a significant increase in ten years for both volume and value, with growth rate of 4.91% for volume and 0.78% for value, gaining 98.569 mt worth US $ 867,703 in 1993 to 137,636 metric tonnes worth US $ 850,222 in 2003. Taking into account that shrimp culture is one of the prime commodities, potential to increase foreign exchange earnings, the Government has made some efforts to cope with disease problems besetting the industry. In this regard, the Director General of Aquaculture, Ministry of Marine Affairs and Fisheries (DGA-MOMAF) is considering other shrimp culture species as alternative. In 2000, DGA made a business breakthrough by giving license to the private sectors to import broodstock and post larvae of P. vannamei into the country. Since then, the P. vannamei culture has been practiced in potential provinces in Indonesia. The success story of P. vannamei culture has encouraged many farmers who used to culture P. monodon, to try the new shrimp species. This increased shrimp aquaculture production, contributing 37.11 % to national production in 1999 and 41.2 % in 2003.