The culture of Penaeus vannamei and other exotic shrimps in Singapore. 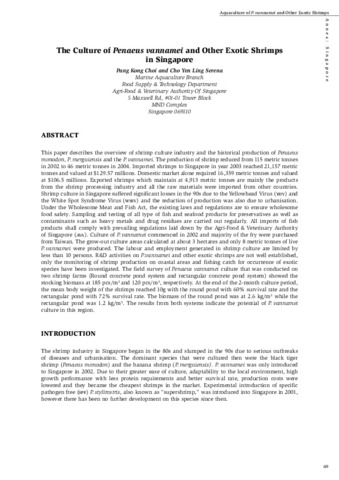 This paper describes the overview of shrimp culture industry and the historical production of Penaeus monodon, P. merguiensis and the P. vannamei. The production of shrimp reduced from 115 metric tonnes in 2002 to 46 metric tonnes in 2004. Imported shrimps to Singapore in year 2003 reached 21,157 metric tonnes and valued at $129.57 millions. Domestic market alone required 16,359 metric tonnes and valued at $106.5 millions. Exported shrimps which maintain at 4,913 metric tonnes are mainly the products from the shrimp processing industry and all the raw materials were imported from other countries. Shrimp culture in Singapore suffered significant losses in the 90s due to the Yellowhead Virus (YHV) and the White Spot Syndrome Virus (WSSV) and the reduction of production was also due to urbanisation. Under the Wholesome Meat and Fish Act, the existing laws and regulations are to ensure wholesome food safety. Sampling and testing of all type of fish and seafood products for preservatives as well as contaminants such as heavy metals and drug residues are carried out regularly. All imports of fish products shall comply with prevailing regulations laid down by the Agri-Food & Veterinary Authority of Singapore (AVA). Culture of P. vannamei commenced in 2002 and majority of the fry were purchased from Taiwan. The grow-out culture areas calculated at about 3 hectares and only 8 metric tonnes of live P. vannamei were produced. The labour and employment generated in shrimp culture are limited by less than 10 persons. R&D activities on P.vannamei and other exotic shrimps are not well established, only the monitoring of shrimp production on coastal areas and fishing catch for occurrence of exotic species have been investigated. The field survey of Penaeus vannamei culture that was conducted on two shrimp farms (Round concrete pond system and rectangular concrete pond system) showed the stocking biomass at 185 pcs/m3 and 120 pcs/m3, respectively. At the end of the 2-month culture period, the mean body weight of the shrimps reached 10g with the round pond with 60% survival rate and the rectangular pond with 72% survival rate. The biomass of the round pond was at 2.6 kg/m3 while the rectangular pond was 1.2 kg/m3. The results from both systems indicate the potential of P. vannamei culture in this region.