A brief review of the larval rearing techniques of penaeid prawns 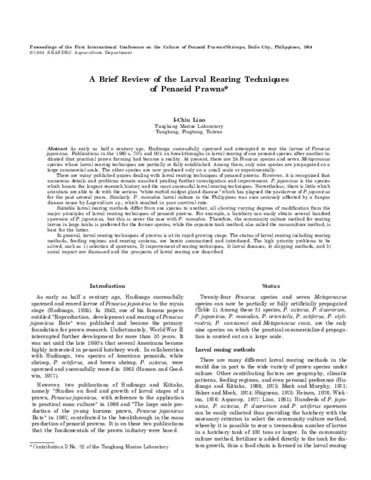 As early as half a century ago, Hudinaga successfully spawned and attempted to rear the larvae of Penaeus japonicus. Publications in the 1960 s, 70's and 80's on breakthroughs in larval rearing of one penaeid species after another indicated that practical prawn farming had become a reality. At present, there are 24 Penaeus species and seven Metapenaeus species whose larval rearing techniques are partially or fully established. Among them, only nine species are propagated on a large commercial scale. The other species are now produced only on a small scale or experimentally. There are many published papers dealing with larval rearing techniques of penaeid prawns. However, it is recognized that numerous details and problems remain unsolved pending further investigation and improvement. P. japonicus is the species which boasts the longest research history and the most successful larval rearing techniques. Nevertheless, there is little which scientists are able to do with the serious "white-turbid midgut gland disease" which has plagued the postlarvae of P. japonicus for the past several years. Similarly. P. monodon larval culture in the Philippines was once seriously affected by a fungus disease cause by Lagenidium sp., which resulted in poor survival rate. Suitable larval rearing methods differ from one species to another, all showing varying degrees of modification from the major principles of larval rearing techniques of penaeid prawns. For example, a hatchery can easily obtain several hundred spawners of P. japonicus, but this is never the case with P. monodon. Therefore, the community culture method for rearing larvae in large tanks is preferred for the former species, while the separate tank method, also called the monoculture method, is best for the latter. In general, larval rearing techniques of prawns is at its rapid growing stage. The status of larval rearing including rearing methods, feeding regimes and rearing systems, are herein summarized and introduced. The high priority problems to be solved, such as 1) selection of spawners, 2) improvement of rearing techniques, 3) larval diseases, 4) shipping methods, and 5) social impact are discussed and the prospects of larval rearing are described.