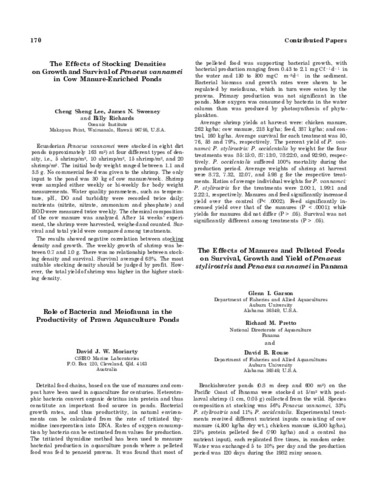 Ecuadorian Penaeus vannamei were stocked in eight dirt ponds (approximately 163 m2) at four different types of density, i.e., 5 shrimp/m2, 10 shrimp/m2, 15 shrimp/m2, and 20 shrimp/m2. The initial body weight ranged between 1.1 and 3.8 g. No commercial feed was given to the shrimp. The only input to the pond was 30 kg of cow manure/week. Shrimp were sampled either weekly or bi-weekly for body weight measurements. Water quality parameters, such as temperature, pH, DO and turbidity were recorded twice daily; nutrients (nitrite, nitrate, ammonium and phosphate) and BOD were measured twice weekly. The chemical composition of the cow manure was analyzed. After 14 weeks' experiment, the shrimp were harvested, weighed and counted. Survival and total yield were compared among treatments. The results showed negative correlation between stocking density and growth. The weekly growth of shrimp was between 0.7 and 1.0 g. There was no relationship between stocking density and survival. Survival averaged 68%. The most suitable stocking density should be judged by profit. However, the total yield of shrimp was higher in the higher stocking density.