Diseases, parasites, commensals and fouling of commercial Penaeid prawns of the Portonovo coast of South India 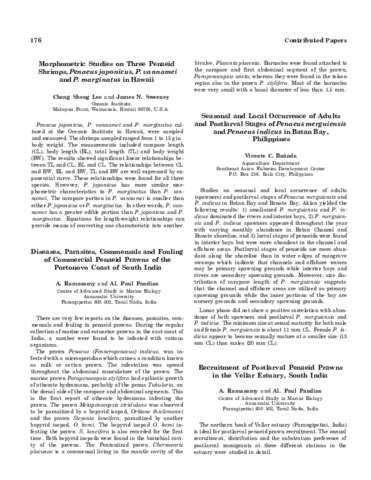 There are very few reports on the diseases, parasites, commensals and fouling in penaeid prawns. During the regular collection of marine and estuarine prawns in the east coast of India, a number were found to be infested with various organisms. The prawn Penaeus (Fenneropenaeus) indicus, was infested with a microsporidian which causes a condition known as milk or cotton prawn. The infestation was spread throughout the abdominal musculature of the prawn. The marine prawn Parapenaeopsis stylifera had epibiotic growth of athecate hydrozoans, probably of the genus Tubularia, on the dorsal side of the carapace and abdominal segments. This is the first report of athecate hydrozoans infesting the prawn. The prawn Metapenaeopsis stridulans was observed to be parasitized by a bopyrid isopod, Orbione thielemanni and the prawn Sicyonia lancifera, parasitized by another bopyrid isopod, O. kemi. The bopyrid isopod O. kemi infesting the prawn S. lancifera is also recorded for the first time. Both bopyrid isopods were found in the branchial cavity of the prawns. The Pontoniinid prawn Chernocaris placunae is a commensal living in the mantle cavity of the bivalve, Placenta placenta. Barnacles were found attached to the carapace and first abdominal segment of the prawn, Parapenaeopsis uncta, whereas they were found in the telson region also in the prawn P. stylifera. Most of the barnacles were very small with a basal diameter of less than 1.5 mm.