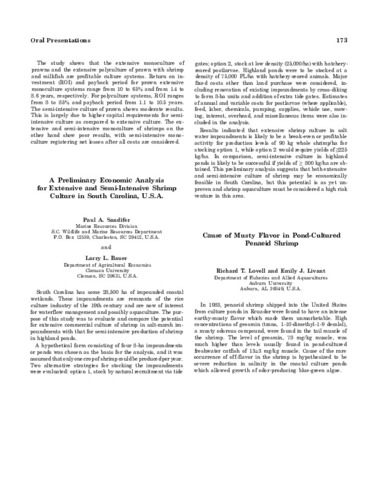 South Carolina has some 28,500 ha of impounded coastal wetlands. These impoundments are remnants of the rice culture industry of the 19th century and are now of interest for waterflow management and possibly aquaculture. The purpose of this study was to evaluate and compare the potential for extensive commercial culture of shrimp in salt-marsh impoundments with that for semi-intensive production of shrimp in highland ponds. A hypothetical farm consisting of four 8-ha impoundments or ponds was chosen as the basis for the analysis, and it was assumed that only one crop of shrimp could be produced per year. Two alternative strategies for stocking the impoundments were evaluated: option 1, stock by natural recruitment via tide gates; option 2, stock at low density (25,000/ha) with hatchery-reared postlarvae. Highland ponds were to be stocked at a density of 75,000 PL/ha with hatchery-reared animals. Major fixed costs other than land purchase were considered, including renovation of existing impoundments by cross-diking to form 8-ha units and addition of extra tide gates. Estimates of annual and variable costs for postlarvae (where applicable), feed, labor, chemicals, pumping, supplies, vehicle use, mowing, interest, overhead, and miscellaneous items were also included in the analysis. Results indicated that extensive shrimp culture in salt water impoundments is likely to be a break-even or profitable activity for production levels of 90 kg whole shrimp/ha for stocking option 1, while option 2 would require yields of ≥225 kg/ha. In comparison, semi-intensive culture in highland ponds is likely to be successful if yields of ≥ 800 kg/ha are obtained. This preliminary analysis suggests that both extensive and semi-intensive culture of shrimp may be economically feasible in South Carolina, but this potential is as yet un-proven and shrimp aquaculture must be considered a high risk venture in this area.