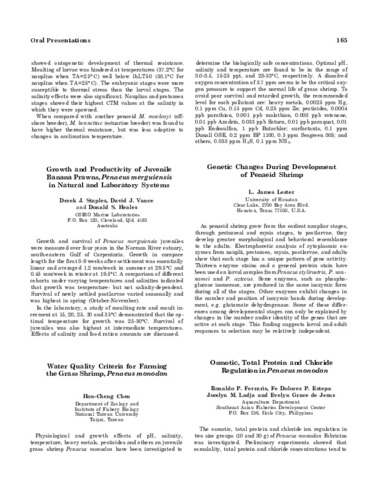 Growth and survival of Penaeus merguiensis juveniles were measured over four years in the Norman River estuary, south-eastern Gulf of Carpentaria. Growth in carapace length for the first 8-9 weeks after settlement was essentially linear and averaged 1.2 mm/week in summer at 29.5°C and 0.45 mm/week in winter at 19.5°C. A comparison of different cohorts under varying temperatures and salinities indicated that growth was temperature- but not salinity-dependent. Survival of newly settled postlarvae varied seasonally and was highest in spring (October-November). In the laboratory, a study of moulting rate and moult increment at 15, 20, 25, 30 and 35°C demonstrated that the optimal temperature for growth was 25-30°C. Survival of juveniles was also highest at intermediate temperatures. Effects of salinity and food ration amounts are discussed.