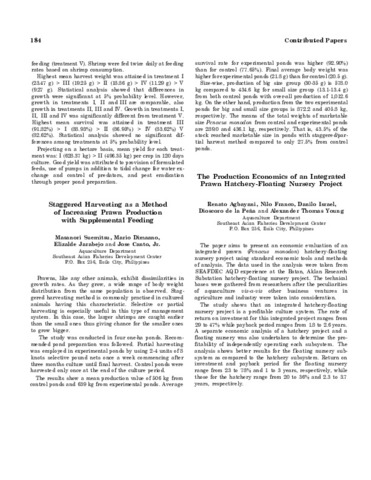 Prawns, like any other animals, exhibit dissimilarities in growth rates. As they grow, a wide range of body weight distribution from the same population is observed. Staggered harvesting method is commonly practised in cultured animals having this characteristic. Selective or partial harvesting is especially useful in this type of management system. In this case, the larger shrimps are caught earlier than the small ones thus giving chance for the smaller ones to grow bigger. The study was conducted in four one-ha ponds. Recommended pond preparation was followed. Partial harvesting was employed in experimental ponds by using 2-4 units of 8 knots selective pound nets once a week commencing after three months culture until final harvest. Control ponds were harvested only once at the end of the culture period. The results show a mean production value of 506 kg from control ponds and 639 kg from experimental ponds. Average survival rate for experimental ponds was higher (92.90%) than for control (77.65%). Final average body weight was higher for experimental ponds (21.8 g) than for control (20.5 g). Size-wise, production of big size group (30-35 g) is 578.0 kg compared to 434.6 kg for small size group (13.1-13.4 g) from both control ponds with over-all production of 1,012.6 kg. On the other hand, production from the two experimental ponds for big and small size groups is 872.2 and 405.8 kg, respectively. The means of the total weights of marketable size Penaeus monodon from control and experimental ponds are 289.0 and 436.1 kg, respectively. That is, 43.5% of the stock reached marketable size in ponds with staggered/partial harvest method compared to only 27.5% from control ponds.