Seasonal abundance of Penaeid prawn seed in the Ennore estuary, Madras in relation to hydrography and lunar phase 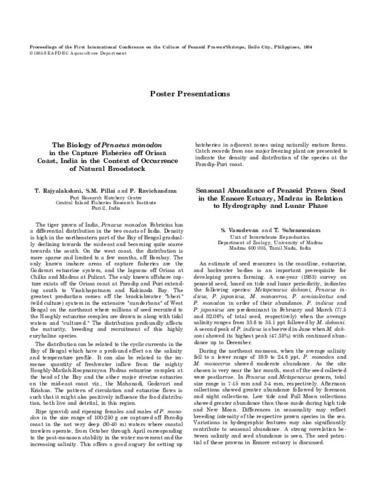 An estimate of seed resources in the coastline, estuarine, and backwater bodies is an important prerequisite for developing prawn farming. A one-year (1983) survey on penaeid seed, based on tide and lunar periodicity, indicates the following species: Metapenaeus dobsoni, Penaeus indicus, P. japonicus, M. monoceros, P. semisulcatus and P. monodon in order of their abundance. P. indicus and P. japonicus are predominant in February and March (77.5 and 82.06% of total seed, respectively) when the average salinity ranges from 33.6 to 35.1 ppt followed by M. dobsoni. A second peak of P. indicus is observed in June when M. dobsoni showed its highest peak (47.35%) with continued abundance up to December. During the northeast monsoon, when the average salinity fell to a lower range of 19.9 to 24.6 ppt, P. monodon and M. monoceros showed moderate abundance. As the site chosen is very near the bar mouth, most of the seed collected were postlarvae. In Penaeus and Metapenaeus genera, total size range is 7-15 mm and 3-4 mm, respectively. Afternoon collections showed greater abundance followed by forenoon and night collections. Low tide and Full Moon collections showed greater abundance than those made during high tide and New Moon. Differences in seasonality may reflect breeding intensity of the respective prawn species in the sea. Variations in hydrographic features may also significantly contribute to seasonal abundance. A strong correlation between salinity and seed abundance is seen. The seed potential of these prawns in Ennore estuary is discussed.