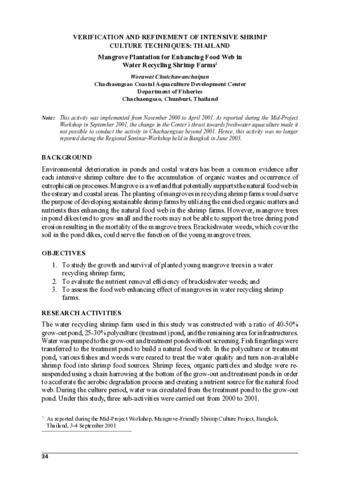 Environmental deterioration in ponds and costal waters has been a common evidence after each intensive shrimp culture due to the accumulation of organic wastes and occurrence of eutrophication processes. Mangrove is a wetland that potentially supports the natural food web in the estuary and coastal areas. The planting of mangroves in recycling shrimp farms would serve the purpose of developing sustainable shrimp farms by utilizing the enriched organic matters and nutrients thus enhancing the natural food web in the shrimp farms. However, mangrove trees in pond dikes tend to grow small and the roots may not be able to support the tree during pond erosion resulting in the mortality of the mangrove trees. Brackishwater weeds, which cover the soil in the pond dikes, could serve the function of the young mangrove trees.