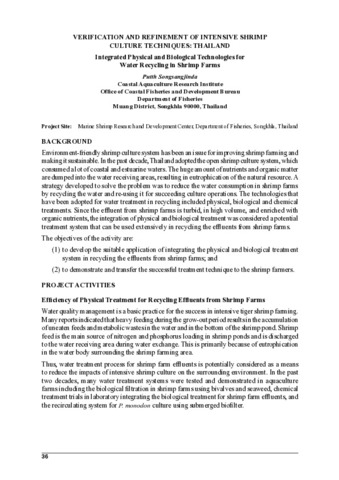 Environment-friendly shrimp culture system has been an issue for improving shrimp farming and making it sustainable. In the past decade, Thailand adopted the open shrimp culture system, which consumed a lot of coastal and estuarine waters. The huge amount of nutrients and organic matter are dumped into the water receiving areas, resulting in eutrophication of the natural resource. A strategy developed to solve the problem was to reduce the water consumption in shrimp farms by recycling the water and re-using it for succeeding culture operations. The technologies that have been adopted for water treatment in recycling included physical, biological and chemical treatments. Since the effluent from shrimp farms is turbid, in high volume, and enriched with organic nutrients, the integration of physical and biological treatment was considered a potential treatment system that can be used extensively in recycling the effluents from shrimp farms.